Narrow your results by:

Contains a series of documents pertaining to Thelma Hill's service in the Royal Canadian Air Force's Women's Division during the Second World War. Includes pages from a scrapbook and a St. John First Aid certificate.

The Air Force Museum of Alberta 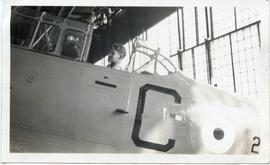 Contains a collection of photographs detailing Ronald Stanford Knight's time as a technician from 1939 until 1946. The aircraft featured in the photographs are pre-war and Second World War era, and include information about the engines contained within the vehicles.

The Air Force Museum of Alberta